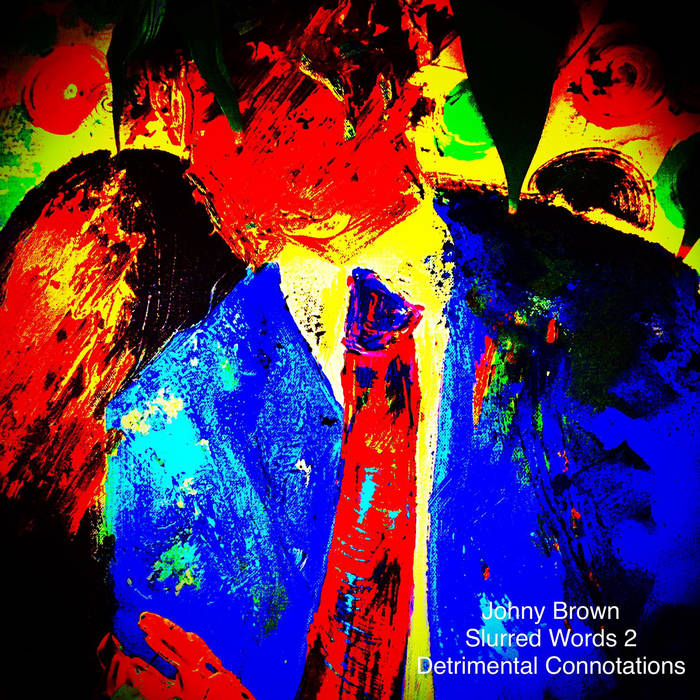 A ‘paranoia of sound’ surrounds spoken word performer Johny Brown on this deep dive into the 21st Century splintering of consensus, the explosion of extremist politics, and the havoc wrought by Covid-19.

Channeling multiple voices and overlapping stories, Brown’s second spoken word collection with Dog Tunnel takes a deep dive into the myriad themes dominating contemporary cultural life: from the voice of a disillusioned street fighter who liked to ‘cause a bit of a stir’ in his past; to the dispassionate slew of media voices; and the unsteady weightlessness of a downsized former worker now finding himself ‘irrelevant … the worst feeling for someone like me’. Our narrator offers fragmentary insights into a ‘static’ period, when ‘things went bad’, a time of ‘reintegration … identity, self-esteem, meaning and purpose’, before his flame burns fiercely again in a new era of conspiracy theories and ‘crisis actors’. Brown’s dark protagonist starts to ‘recognise opportunity once more’. Amidst all this a fierce sense of unease is building; as this year unfolds, a ‘ghost ship’ washes up, with ‘skeletons on board’. ‘We think we are dying because we are poor and we eat badly. Now we know it is something else again. So many people dying, we start calling it Ghost Disease’.

The ‘Struck black Mercedes’ of Supercharged Image and sparse meditation on ‘county lines’ drug gangs offers no real respite from the gathering darkness, but Brown’s ear for culling the poetic zeitgeist from the staccato rhythms of rolling news prose is compelling and his delivery grounded. Never an easy listen, Slurred Words 2 is a taut and theatrical compilation mixing poetry, spoken word, and sound art. But among this biting take on a fragmentary and confusing era, and a universally difficult year, Brown weaves a compelling structure as he drifts between and blurs characters and situations, and his familiar literate playfulness surfaces in moments of brief respite, warning us all to be on guard against both fake news and ‘indefinite articles’.

Sound improvisation accompaniment, performed live by Dog Tunnel, consists of overlapping harmonium drones, tape loop, and echo unit, fed into the studio’s 2-metre steel reverb plate, imbuing a wash of rich texture and peaks of blaring mechanical distortion. The effect is of a tense and building ‘paranoia of sound’ that builds on Brown’s performance, at times threatening to overwhelm it, subsiding, and then surging once more. Vintage analogue effects further enrich and augment the performance; ‘planes at airports are grounded’, Brown intones flatly, his announcements ricocheting like the Tannoy at some deserted terminal.

All physical formats are strictly limited editions produced in-house direct from the master tapes, with records cut on a valve-driven RCA studio-quality lathe from the rock n’ roll-era. With a true analogue signal path, recorded and mixed to open reel, and mastered to cassette and 12” disc, Slurred Words 2 has the feel of an artifact from a more coherent past. It is also a warning to be on guard against misdirection as we drift towards fragmentary and intangible digital futures.

Artist bio.
Johny Brown is the vocalist in Band Of Holy Joy, he produces and presents the BAD PUNK radio show on Resonance 104.4 FM every Friday night. He has had plays performed at the Traverse in Edinburgh and the Theatre De'Ville in Paris amongst other places. With Inga Tillere he published the book of text and image Field Notes, which also co-exists as a fluid performative arts piece. Slurred Words 2 is the follow-up to his first spoken word record, also released on Dog Tunnel.

Velvet Sheep asked us to talk about the new tracks and to pick a favourite 'Song for Ewe', which of course we were happy to do: velvet-sheep.com/song-for-ewe/dan-of-dog-tunnel-records-song-for-ewe/

Not content with listing this release in their November playlist (blaue-rosen.com/monthly-playlist-favourite-albums-november-2020/), Blaue-Rosen subsequently put this 'poetic sonic summoning' as one of their top releases of the year! Find the full list at: blaue-rosen.com/best-albums-of-2020/.

If you want to release with us get in touch, all genres considered, but only projects we like accepted. ... more

Bandcamp Daily  your guide to the world of Bandcamp

outré black metal, with a Victory Over the Sun interview and music from Liturgy and Jute Gyte.